The composite (above) shows Pompeiian imagery of the Roman Lares –  household deities –  as depicted in (i) the later and (ii) in the earlier, more naturalistic, style. The later is dated to between 64 AD-79 AD, after which Pompeii was lost in an eruption of Vesuvius.  Some Pompeiian villas also had mosaics set near the entryway, showing the household’s canine guardian. Two examples below.

The question I want to consider now is whether the passage from Vergil (Georgics 3.344)  is well served by modern commentaries or whether, on the contrary, Vergil- and possibly Isidore – understood  ‘Amyclaean’ as distinct from ‘Spartan’ .  The commentaries distinguish two types of Spartan breed, the  ‘Castorian’ and the ‘Vulpine’.  Neither was a shepherd-dog; they were farm-dogs useful in guarding flocks and in flushing smaller game.

Treatises on hunting, and on dogs, include  Arrian’s  Cyneneticus where the Laconian is treated as a noisy breed:

“[The Laconian dog gives chase …] vigorously without relaxing, with much clamor and baying, all coming out together after the hare on every side. Let them pursue fast and brilliantly, borne along after her in a pack, giving tongue properly again and again“

Oppian  recommends the Laconian “for the swift chase of gazelle and deer and swift-footed hare” (I.412ff).

Lucan says it must be left behind in the last stages of the hunt for this reason, though the Spartan used scent rather than sight:

“So the hunter: until he surrounds the stags…he checks the noisy mouth of the swift Molossian dog and ties his Spartan and his Cretan hounds, entrusting the forest only to the dog which picks up traces with its muzzle on the ground and – when the prey is found – knows not to bark, content to show the lair with quivering leash.” Lucan, Pharsalia (437 ff)

The ‘Cretan’ dog is surmised a cross between the Spartan and the Molossian breeds. Of this, more, below.

We know from the archaeological that far more canine breeds and crossbreeds existed than are mentioned by the poets.  The ‘Spartan’ and Virgil’s “Amyclaean” were of course native to Greece.

Isidore’s quoted passage appears below; I add the same from later translations and commentaries to show how the understanding of this passage is affected by the belated recognition of incongruity for in imagining Libyan/Berber shepherds being kitted out just like Roman soldiers on campaign.

Isidore’s quoted section is underlined:  “The African herdsman carries all with him, his house [or: shed], and household god[s] and arms, and Amyclean dog and Cretan quiver.’  Did he also think  ‘Amyclean’ (l.345) and  ‘Spartan…’ ( l.405) synonymous? .

WHEN classical sources mention the town of Amyclaea there is a constant  implication is of the primordial –  the time of the gods – and of Amyclean objects’ having supra-natural virtu.  Statius uses the same   terms, in reverse order a century after Vergil, as he speaks of weapons which Artemis personally laid on Atalanta’s beautiful son:

In this case ‘Amyclaean’ cannot be a synonym for ‘Spartan’ .   Spartans are scarcely noted for eminence in archery, nor in the making of quivers, where Cretan archers were feared and employed throughout the Mediterranean, and from before the rise of Rome.  Pausanias was of  Sparta, and he shows a distinct inclination to play down the greater antiquity of Amyclea and its god, but he cannot admit that it is.  His description has been supposed to refer to a ‘proto-Spartan’ object, but it sounds rather like certain Cycladic or Egypto-Syrian finds.

It is not the work of Bathycles, being old and uncouth; for though it has face, feet, and hands, the rest resembles a bronze pillar.  On its head it has a helmet, in its hands a spear and a bow.

In choosing the term – and regardless of what dog he was thinking of –  Virgil invoks that same impression of the primordial and  of virtu almost supra-human.

Describing Amyclea, for example, Pausanias (a Spartan) asserts the ancestor of the Spartans and of the Amycleans brothers, and that the Dorian arrival in Laconia was a ‘return’.  His own description of Amyclea’s chief cult statue argues otherwise: it is accepted today as ‘proto-Spartan’ and the very fact that Pausanias speaks disparagingly of an ancient religious figure suggests a source of contention between the two groups, an artefact supposed proof of Amyclean precedence.

The Alexandrian mosaic – an ‘Amyclean’? 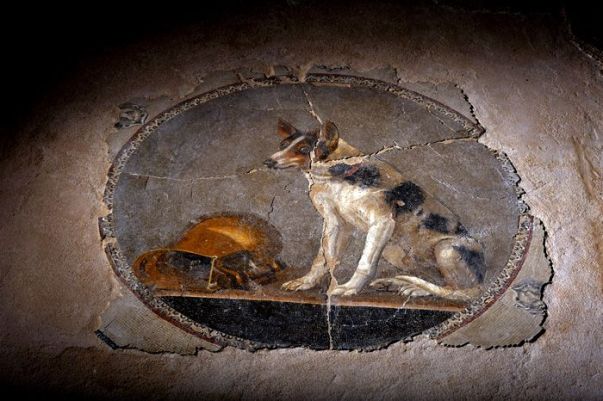 From the Libyan-, or western side of the Egyptian Nile in Egypt –  that is, from Alexandria – we have this mosaic  dated to a century before Virgil’s composition of the Georgics, but just as he suggested when speaking of the ‘Amyclean’ dog, this does as a ‘through the looking glass’ version of the Laconian. I know no other instance of a dog’s being shown alone with a quiver and this is of unusual form, evidently dual-purpose.  If the handle were locked into the recess and groove provided, the object served as a quiver; when open, it allowed the container to be used for  carrying and straining a liquid (note the strainer-stopper inside the neck). Is the true ‘Cretan quiver’?

The Laconian breed’s description is almost, yet not quite applicable, the Cynageticus’ description of the Spartan breed reading(IV. 1, 7-8):

“large with a small head,  straight nose, upright ears, a long and supple neck, and eyes black and sparkling … tan with white markings on the face, chest, legs, and rear; or black with tan markings.”

The Alexandrian dog appears to be large with a small head, straight nose and upright years yet its neck is short and thick.  The sharp eyes are ringed with white and the coat distinctly tricolour as the  the Laconian’s never was.

Such characteristics are still seen among the semi-wild dogs used as guard-dogs by tribal herders from Syria to western North Africa. At present – and perhaps unfortunately – modern selective breeding of what is called a ‘Canaan dog’ is eradicating the tribal dogs’ points in common with the Alexandrian.  (The kennel club standards can be read here).

Below are seen two natural  Bedouin dogs. The first retains a vestige of the Alexandrian animal’s tricolour and which distinguishes it from the classical poets’ Laconian, though termed an ‘undesirable trait’ in the modern ‘Canaan dog’.  Again, the natural or semi-wild animals show something of the Alexandrian’s thick lower limbs; they have the same mask and its widening blaze between forehead and mouth. Perhaps most tellingly, both have that pattern of spots on the lower spine extending to the rump.  And so – like the Alexandrian – they are ‘nearly-but-not-exactly’ Laconian.  These, I’d suggest more nearly resemble those dogs of the Libyan herders that Virgil, at least, termed ‘Amyclean’.

Post nineteenth-century commentaries on the fourth Georgic have supposed, increasingly and cumulatively, Vergil’s  ‘Libyan’ tribesman  Numidian, and taken ‘Amyclean’ as a poetic equivalent for ‘Spartan’ or ‘Laconian’. The process by which the idea hardened over time before the incongruity of supposing all Libyan herders had Spartan dogs and Cretan quivers then led at last to the use of quotation marks about those adjectives in the Georgics. (see further above).

This site uses Akismet to reduce spam. Learn how your comment data is processed.